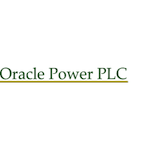 It is now two years since His Highness, Sheikh Ahmed Dalmook Al Maktoum, clambered aboard the jam-tomorrow joke that is Oracle Power (ORCP). News of the Sheikh's involvement saw its shares surge to 1.25p. Last December, he exercised 200 million warrants, meaning he now owns 500 million shares, for which he paid 0.25p each. But Oracle’s share price has flagged a bit of late, as investors have grown mightily tired of its jam-tomorrow coal and gold projects.

And today's ramp from David Lenigas is....

To be fair, shares in the company are up by 26% today at 0.43p on news that it has finalised and ended a death spiral. But any company that has to use a death spiral is likely to be shit and shares in this company are down by 39.06% over 1 year, 86.01% over 5 years and 96.65% since its IPO just over a decade ago. Truly a penny dreadful, just the sort of stock David Lenigas likes to ramp. Dave's dog de jour is ...

How insane is this even by the standards of the AIM Cesspit? In late August this year I exposed how Sheikh Ahmed Bin Dalmook Al Maktoum had invested in a placing by what was MX Oil (MXO) got it to change its name to ADM Energy (ADM) in his honour as he became President, saw the shares rocket, and then sold all his shares before announcing he was quitting sending the shares crashing from 20p to 4.5p today. Wind forward to November 28…

Oracle Power is suddenly very popular - so when is the next placing?

Oracle Power (ORCP) seems to have become popular all of a sudden and has seen its share price rise by around 80% in the past week, but as usual some on the bulletin boards seem to be claiming that it should actually be worth many multiples of its current valuation.

If you want me to analyse a stock for you just drop me a line at sqmir@hotmail.com - Today I look at shares in Oracle Coalfields (ORCP), Petroneft Resources (PTR) and Sound Energy (SOU) and setting share price targets for all three stocks.

Shares in long-unfavoured Oracle Coalfields (ORCP) have been winning some new friends in the wake of acceptance by government of Pakistan’s Sindh province of the company’s pricing petition for its 1.4 billion tonne brown coal (lignite) project in the province’s Thar desert. Shahrukh Khan, entrepreneurial Chief executive officer of AIM-quoted Oracle, argues this acceptance, which will still needs federal ratification if the Sindh government approves, amounts to a ‘green light’ for the projected first phase of the project, which envisages producing four million tonnes a year to feed a 600-megawatt power station for the electricity-hungry region, at an initial price for the lignite of $76.48c (£49) a tonne, subject to later annual review.