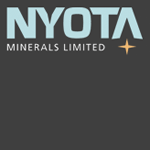 New Bulletin Board Moron of the Week contest - sponsored by Nyota Minerals, motto: "We don't need no stinking cash, assets, or Nomad"

This week's Bulletin Board Moron contest is sponsored by Nyota Minerals, a company that has more lives than all of our reader's cats.

Last night at 5.25pm Nyota Minerals (NYO) announced that its shares were being booted off the AIM casino. The roll call of shame on this one is appalling. We have AIM Regulation, broker Peterhouse and the directors of the company seemingly all at fault here, not to mention former Nomad Beaumont Cornish and two further Nomads, ZAI Corporate Finance and Allenby being dragged in. It is a true horror show. But rather than look in the mirror, the directors pointed the finger at ShareProphets – blame the media, the investigative journalists, blame evil Tom Winnifrith and myself, Nigel Somerville. This is shocking.

Nigel Somerville asked yesterday why Nyota (NYO) had not been booted off AIM having lost the services of its Nomad, Roland "fatty" Cornish. There has been no RNS so far but here is what is happening.

Nyota – how low has the bottom end of AIM sunk?

Today is the day that Nyota was to have been booted off the world’s most successful growth market unless a replacement Nomad had been appointed, Beaumont Cornish having resigned in mysterious circumstances. Of course, today is a Sunday, so we should have heard something on Friday. But as predicted HERE, there was nothing. I guess the shareholders always knew where they stood, but now it is confirmed: you are at the bottom of the heap.

Nyota Minerals – leaving it to the wire

AIM-listed Nyota Minterals (NYO) seems to be leaving things to the wire with reference to the appointment of a new Nomad to replace Beaumont Cornish. The deadline falls over the weekend which presumably means that the guillotine should fall tomorrow if there is no news by close of play.

Beaumont Cornish resigned as Nomad from AIM-listed Nyota Minerals (NYO) on 17 August with the caveat that it reserved the right to go sooner, as per Nyota’s RNS of 18 July. That statement also announced that Peterhouse subsequently also informed the company that it would resign as broker. Both stepped down as planned, leaving the company suspended on the Casino with bugger all cash. Wind forward to last night (after-hours, natch) RNS and as previously flagged on 15 August, Peterhouse last night was announced to have withdrawn its notice of resignation  and lined up a £550,000 placing at 0.005p. Meanwhile the company tells us that it is confident of appointing a replacement Nomad. It is full RTO steam ahead, then.

Nyota – no-one is watching o’clock update: no Nomad, Peterhouse back in the frame and placing at a “substantial discount” if a Nomad can be found

AIM-listed Nyota Minerals (NYO) announced a company update last night at no-one-is-watching o’clock. The good news is that we were watching, the bad news for anyone left holding the stock is that Peterhouse is planning to “unresign” itself if the company can attract a Nomad before it is kicked off AIM altogether, with a potential placing at a “substantial discount” to last night’s closing price.